Only Wheat Not White - Varsha Dixit

Only Wheat Not White
by
Varsha Dixit

What if the one you completely love is the one you simply can't! Twenty-six-year-old Eila Sood moves to America to mend fences with her estranged older sister, Sheela. Eila and the rest of the family in India had cut off ties with Sheela after she married Steve Jacobs, 'out of caste, and out of color'. Elia soon realizes that Sheela's marriage is on the rocks. To help pay Sheela's household bills, Eila takes a second job at an afternoon strip club. When she crosses paths with the owner, the handsome Brett Wright or 'blue-eyed ogre' as Elia calls him, he both infuriates and fascinates her. Brett turns out to be her reluctant and unquestionably sarcastic knight in shining armor. As Eila and Brett spend more time together their desire for each other builds. However, when Brett discovers the true reason for Eila's refusal he storms out of her life, accusing her of being a prejudiced coward. Will Eila find the courage to break stereotypes and embrace her love? Will Brett find solace in the arms of his ex-girlfriend Cate? Will Sheela and Steve divorce? All of these questions and more are answered in Varsha Dixit's latest and humorous and steamy love story.

I'm the author of four books and the genre that I write is contemporary romance. Penning stories defines and completes me.I thinks of myself as a borderline obsessive-compulsive dreamer who thinks deep but writes light. A true ‘feel good’ junkie seeking quick fixes, I love a good laugh and a good book. A voracious reader of who dunit mysteries and legal dramas, I did sit down to pen a book on serial killers but finding it impossible to maim or kill anyone, even on paper, I penned a romantic story instead. Thus, I found my true calling – at least for the time being.Even though creativity is gender free, I feel blessed and enriched to be a woman.
Currently, with my family, I'm settled in the US.

Join the Rafflecopter for wonderful prizes

This Tour is Hosted by 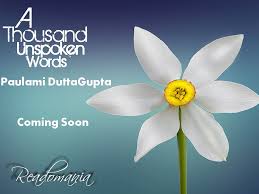 “Make change, be a part of change.”

There is no perfect man or woman in this world, and thank God for that! Here is a book that, once again, brings out this fact, as many others have done earlier.

'A Thousand Unspoken Words' is a beautiful and apt title for a theme where the male and the female protagonists keep many vital thoughts to themselves, almost expecting the other to be able to read the mind.

Tilottama is the spirited modern heroine, feisty, yet afraid to take a step towards love. She is in love with a shadow, Musafir, an idealistic writer who wants to change the world. “He gives me a reason to love, to feel each moment of life, to write.”

She is level headed, but does have her moments of impulsiveness. When she runs into photo journalist, Riddhimaan, she is disillusioned with his frivolous attitude to life, despite the fact that it turns out that it is just a facade. "Somebody must have hurt him very badly. He has sad eyes that he hides behind his antics."

Riddhimaan’s mother, Krishnakoli Banerjee, comes across as a strong woman, a character that one falls in love with, for her sense of humour and her solid support of Tilottama, who calls her 'Mashima'. In turn, the older lady refers to Tilottama an Amazon, a warrior princess, which shines a light on the girl's nature.

Krishnakoli and Riddhimaan share a warm bond. This makes the ensuing events even more heart wrenching. Her banter with her son, her hope that she will marry Tilottama who is already like a daughter to her, and the losses she herself has borne in life make her hope that her son will not throw his life away.

The attraction between the two main characters is palpable. However, Tilottama’s heart belongs to Musafir, and Riddhimaan hates that, for he always finds himself wanting. He comes across as a tragic hero with dark alleys around him. Tilottama says at one stage, “I know this brings a rush of uneasy memories. But you have nothing to hide. You’ve worked hard to prove yourself. Why do you need to run?”

Riddhi tells his mother, “She is beautiful, brave and intimidating. But she also reminds me of my past, something I sometimes want to forget. Tillottama and I will be a disaster.” Is this a hint that events may, perhaps, cast their shadows ahead?

The best advice that Riddhimaan gets from Shoumo Sen, Tilottama's father, is this. "Riddhimaan, if you ever feel that something is plaguing you just look at the ideas and beliefs you so love and try and become friends with them again. And then watch how magically things work out," The irony is that both Shoumo Sen and Riddhimaan have robbed Tilottama chances to love in their own ways, a point that comes across subtly.

The crux of the book comes across in a broken hearted Tilottama’s words. “He feels like…like I would always choose Musafir over Riddhimaan. In fact I've always felt Riddhimaan is jealous of Musafir. He has always wanted me to discard Musafir."

Will Tilottama be able to choose betwen the two? Is this a battle in her mind between the intellectual escapism of Musafir, or the irreverent instability of Riddhimaan?

There is much reality in this book - the plight of the farmers and hawkers, protesters being killed indiscriminately, concrete spaces eating away the greenery, land acquisition issues and police firing, displaced people, the ban of the English language and the vandalizing of a printing press. Paulami has incorporated these issues without sounding preachy, which is a feat in itself.

"If you are grains of sand, I will be the waves. Every time I come to you, you might push me away, but you would also mingle with me little by little until we both forget who the wave is and who the sand."

It is lines like the above that reveal Paulami’s literary prowess.

Both Tilottama and Riddhimaan are irrevocably in love with the City of Joy.. Maybe why Paulami has written a love story in which the soul of her city, Kolkata, resides. 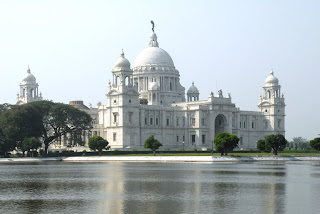