Dumping Woes that We Compound! 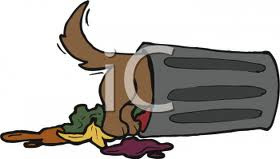 An old adage talks about the saddest sight in life being a puppy with its tail tucked between its legs. And if the said puppy is seen snuffling its way through a giant garbage heap on the street, the sight is sadder still! Amazingly, a perfectly good, empty garbage can stands desolately on the side, hiding its face in sheer neglect. Most of our cities are huge garbage cans, with every honest citizen putting in his pennyworth of rubbish in an act of charity. In this case, charity doesn’t begin at home, but on the road in front of one’s home!
Sadly education touches on every aspect in pedagogy, needed and otherwise, but fails in teaching students the basic aspects of hygiene. If every parent pointed their child towards the wastepaper basket, and the larger dustbins, within their homes and beyond, these same children would take care not to throw chewing gum wrappers, biscuit covers and plastic packets on the road. And we would not see the housekeeping staff of major IT companies picking up all the waste from their canteens and leaving it around blatantly on the roads! Aren’t IT people highly evolved humans, after all? But does one employee bother to rebuke the staff, or stop the littering?
Shopkeepers are also habitual offenders. Once their own dustbins overflow, everything gets tossed onto the closest bare space. Keeping one’s own space sacrosanct is vital, and to hell with the rest! The solution lies in getting more cavernous dustbins and, more importantly, aiming one’s own waste into it.
One’s own waste could be a pun as well, especially one walks along railway tracks and fields, where people sit alongside and donate little packages of fertilizer in the most natural way possible. Reminds one of Kamal Hassan’s classic silent film ‘Pushpak’, if you know what I mean! Train journeys along this route can be unpleasantly picturesque, punctuated by moon shapes, in all sizes and shapes, from the tiny to the blatantly large! And what is there to be ashamed of... the faces are turned away, aren’t they?
Waste segregation is taught in a few schools which insist on three coloured bins in every classroom. The food scraps go into the green one, bits of paper and stationery into the blue one and the red one devours the plastics and the non-biodegradables! Segregation of waste into wet, dry and hazardous wastes can be done in homes as well, where the first two can be reused, so that landfills are left only with the third kind, making garbage disposable a less onerous task. The alternative is huge expanses of land filled with an unsightly amount of garbage which can be seen and smelt a mile away! Not to talk of the health hazards, as well!
So there you have it in a nutshell... dump it or lump it!