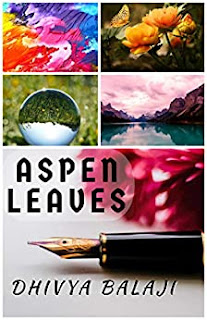 When a blogger turned editor decides to write a book, it is likely that it will be one free of glitches and gaffes. 'Aspen Leaves' by the talented Dhivya Balaji is one such book. The title makes one think of delicate leaves that tremble in the sunlight, akin to the stories in the book that dance their way into the hearts of the readers, quick and fleeting, only to stay there forever.

There are ten stories in the book divided into three sections – Drama, Supernatural and Revenge Drama. What makes these stories unique is the association of each with a colour that gives each story its meaning and its emotion, colours that are as rare as they are beautiful.

The emotions are universal. Is it better to hide a life of passion rather than live a life of austerity? Are there truths that are realised too late in life? Is it possible for perfection to lose its sheen and turn mundane in a relationship? How significant a role does religion play in wedlock and can a woman ever reconcile to being a choice, rather than a priority? How can one react to ridicule on social media and learn to rise above it?

These are some of the real-life situations that the author throws at the reader, in the first section of her book.

In section two, where the supernatural is explored, an element of sadness travels through the themes. Two women exploit the secret of miracles in everyday life. “There was nothing people feared more than unlimited power, and anything that could not permeate their closed minds was, according to them, unlimited.”

The next tale deals with a clairvoyant whose visions lead her down a disastrous path as she travels along a parallel path that intersects her life. The author moves on to a story that captures the interest of the readers as they enter a haunted house, only to be rattled by the events that take place thereafter.

Section three moves on to tales of revenge drama, where twisted minds devise plots that are macabre, and double-cross others at the drop of a hat. Friendships are severed, crushed and abused, and the lesson is patently clear. Do not trust blindly, for the world is not always an understanding place.

Dhivya Balaji’s style of writing is impeccable, as she highlights ordinary situations in an extraordinary manner. The stories flow, one into the other, carrying the readers along with them, often ending on a twist that they do not see coming. The stories that impressed me most were ‘The Note’, ‘The Clairvoyant’, The Lake’ and ‘Scorned’.


As one of her characters put it so effectively, “She had heard the words the universe had destined for her.”

Exactly what this perceptive author herself has done! 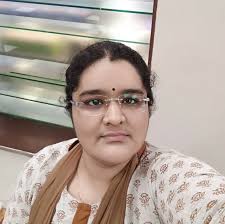 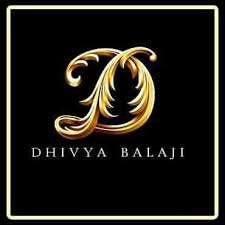 Unloved in Love - The Story of Imperfect People by Rituparna Ghosh 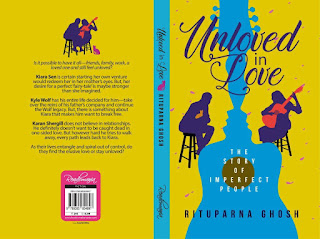 What makes this story – Unloved in Love – different from any other similar romantic saga, when the title itself is an oxymoron. What does author Rituparna Ghosh say that distinguishes this book from others? Maybe, it is in the way she says it. Ms. Ghosh reveals a wry sense of humour from page one, when she introduces the way her heroine, Kiara, was born to parents who were taken aback when she arrived. From that point on, Kiara continues to be self-deprecating, “cruising rock bottom in expectations” till she shocks everyone by doing well as a career woman.

Three main voices tell the tale, followed by a fourth voice at the end. The three voices belong to Kiara Sen, Kyle Wolf (an interesting German background there) and Karan Shergill, three attractive young people, as they take the action ahead in a series of see-sawing events that keep the reader wondering what the outcome will be.

Kiara sees herself in a mirror that is diametrically opposite to how others view her, maybe due to a childhood that has been eclipsed by supposedly more attractive and intelligent siblings, and a mother who minces no words. So, when two men, who are also best friends, vie for her affections, she turns into a nervous wreck, torn between a pair of grey-blue eyes on the one hand, and gorgeous brown eyes on the other. That one has Greek God looks, and the other has two scars on an unconventional face, does not help in the least.

Both Kyle and Karan have their own share of angst, fuelled while they were growing up… issues of abandonment, trust, authoritarianism, emotional turmoil, and career and relationship woes. While one needs Kiara to make him feel braver and basks in her “witty, insightful, doe-eyed adulation”, the other drowns in her expressive eyes, and declares his feelings openly to the reader, but never to Kiara. “She encouraged you to completely surrender to her, to let go and totally and utterly belong.”

Kiara grows as a person, and as an entrepreneur, through all her tribulations. She is only human as she lets go of opportunities for the sake of love, but she hangs in there, standing on her own feet till she finally emerges triumphant.

By the end of the book, the reader wants her to take a particular path. The man who loves her waxes eloquent. “I was again reminded of a warm afternoon by the beach, sea gulls cawing and gentle waves dancing around my ankles.” A man who can say something that romantic is worth having!


However, just when the reader is waiting for that perfect ending, Ms. Ghosh whisks it out of the way. This is a book about imperfect people, after all, which does not take away from the fact that it is a delightful story worth reading! 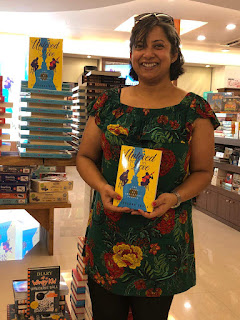 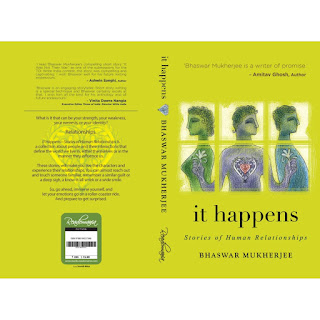 The artistic green cover leaps out at you, even as you take in the succinct title – 'It Happens'. Bhaswar Mukherjee has proved to be a miracle worker, as fourteen of the fifteen stories in this book by Readomania were entries for the TOI Write India contest. In fact, his writing has been noticed and lauded by greats such as Amitav Ghosh and Ashwin Sanghi.

Delving into the stories, you realise that they are little vignettes of life, showcasing various places by linking them to scenarios that nestle in the minds of all Indians – the Babri Masjid imbroglio, bomb explosions in urban Kabul, “a maelstrom of conflict”, the Indo-Pak border conflicts and militancy, the devastating hurricane Vardah that hit Chennai, the brutality of the Khap Panchayats and the like. Each of these stories holds up a mirror to society, where the author puts in a pertinent comment, almost like an aside in a Shakespearean play. For example, “In the current state of politics, the communal card and the religion card are the only two in play now.”

The first story ‘Karma,’ one of my personal favourites, encapsulates an entire philosophy which convinces the reader that “Life metes out justice sometimes bigger than the courts.”

There are stories which reveal the simpler truths in life, such as how one cannot control destiny, whether in the case of a ruined garden or the illness of a beloved mother. Some plumb ugly depths, opening a Pandora’s box of incest, molestation, the internalising of suffering, clinical depression and revenge. My heart went out to one poignant tale where a person felt trapped in the infirmities of his sexual orientation, or “putting a veil over one’s identity”, as it were.

What shines through is the way Bhaswar Mukherjee modifies the style of his writing to the theme. For instance, in 'Amherst Villa’, there is a gravity that allies itself to the age and erstwhile grandeur of the building. “In reciprocity, I watch the decay of social mores and morality around me as I do the declining opulence and the fragmenting family within.”

“He is looking for a girl who does not know he exists, or the story that has brought him here.” What a beautiful way to start the story titled 'A Lament Too Late!

An almost Wodehousian touch shines forth in certain lines in ‘Remarriage’. “When she had first seen those eyes, they looked like ‘limpid pools’. They now resembled those of a fish, with malfunctioning gills.”

The stories I particularly liked were Karma, Amherst Villa and In the Eclipse of a Memory.  In conclusion, this is a book that deserves to be read at leisure for each tale needs to be sipped, and savoured. 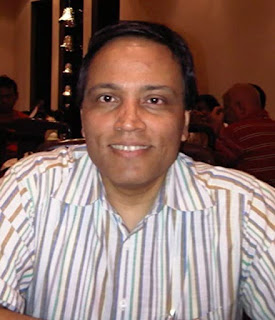